How to Cure Canine Bloat

What is Canine Bloat? The key thing to know is that this is potentially a life threatening medical condition.

Bloat refers to the bloating of a dog's stomach. Essentially it is a gas build-up in the stomach which cannot be released.

Bloat with Gastric Dilatation-Volvulus (GDV) occurs when the stomach fills with gas and twists 180 to 360 degrees on it's axis between the esophagus and duodenum or the entrance and exit parts of the stomach.

Bloat is a very serious problem in large breed dogs. When combined with the complications of GDV, bloat is a leading cause of death of dogs, second only to cancer.

The exact reason a dog is bloated in unknown. Veterinary researchers believe that excessive drinking and eating followed by exercise may result in bloat. The hypothesis is that exercise leads to a build-up of gas in the stomach from food or liquid.

The is of greater concern and seriousness when the stomach twists upon itself within the abdomen in a clockwise rotation causing the inlet and outlet of the stomach as well as blood vessels which supply the stomach to become constricted at both ends.

This results in a loss of blood flow which will cause the stomach tissue to die. In a very short time, the stomach is deprived of oxygen and nutrients. If not treated, it can cause death.

What Are the Symptoms of a Bloated Dog? 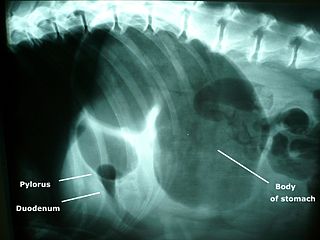 One or more of the following symptoms are seen in a bloated dog:

What Causes Bloat in Dogs?

As mentioned, the trigger for canine bloat is unknown. The direct cause is when the stomach fills with gas and the dog is not able to release the gas or relieve the pressure.

Bloat, with GDV, is when the stomach becomes twisted. This closes both the esophagus and pylorus, preventing the dog from relieving the gas pressure. This pressure would typically build-up after a larger meal.

This urgent medical problem can also cause shock, coma and eventually death. When a dog is bloated several factors are believed to trigger the condition :

Are All Dogs At Risk Canine Bloat?

Smaller dogs can get bloat, but Canine bloat and GDV usually only effects larger breed dogs.  It is thought that some breeds are genetically at a higher risk.

Though bloat can occur in puppies, it is a condition which usually occurs in adult dogs. Males are more likely to suffer from bloat than female dogs. For example, 40% of Great Dans will have bloat in their lifetime. It also occurs more often in older dogs starting at middle age.

Here is a list of some breeds that have a higher chance of being effected by bloat and GDV:

A case of a bloated dog is a chronic problem. If you suspect dog bloat, call a Vet right away. Every second counts! To confirm the specific diagnosis of a bloated dog, a Veterinarian will take an X-Ray.

If diagnosed early, treating a bloated dog involves the insertion of a tube or tochar into the stomach wall. The tube will help to release any gas.

If indicated, the veterinarian will operate on the dog in order to un-twist the stomach in order to put it back into the normal position.If needed, a Vet will also remove the dog spleen. After surgery, a dog will remain in an intensive care unit for a few days.

Secondary treatment will  address symptoms such as dehydration (with intraveneous fluids), fatigue, shock and other symptoms that are a result of the  stomach distension.

When a dog is bloated and if caught early, 80% will fully recover. If the blood flow is cut off due to a twisted stomach (volvulus) and if the damage is chronic or severe (a condition called gastric necrosis), then the prognosis is poort.

Prevention of bloat can be difficult. Because there are so many possible causes for this condition, prevention must be examined on an individual basis.

- Do not use elevated food bowls

- Do not allow your dog to drink large amounts of water after eating.

- Add an enzyme product to your dogs food

- Explore emergency veterinary care in advance of a problem

- Gastropexy surgery, which helps to prevent a future recurrence of bloat or GDV.  Also, if you have a breed that is know for bloat, a gastropexy may be recommended before any cases occur.

Have A Labrador Retriever Bloat or Digestive System Related Question for our Veterinarian?

Do you have a Labrador Retriever bloat, stomach or digestive system related question for our Vet? We'll answer it for FREE! Just fill out this form and our Vet will get back to you as soon as possible.

Please include information such as the sex, medical history, medications, changes in behavior, when symptoms first appeared and anything else you believe would be helpful. Please send a picture to help us get to know your pet.

Questions are answered on a first come, first served basis and may take some time depending on the number we receive. If you have an urgent question, we suggest using this low cost online veterinary question service that has Vets standing by 24 hours a day, 7 days a week to help.

From Information on Canine Bloat to Labrador Retriever Guide Home