As a breed the Silver Labrador retriever is something of an enigma.

Commanding high prices and coveted by many owners other people in the canine world believe them to be artificially created hybrids and not a true Labrador at all.

The Labrador has been a favourite pet throughout the years to millions around the world.

With Labradors having a proven track record of doing more positive deeds without any terrible incidents surrounding them, it is unthinkable for controversy to revolve around this most wonderful of breeds.

Unfortunately, these breeds are under fire by some kennel clubs and groups, but they are not targeting the average Labrador; they are targeting the rare silver Labrador retriever.

These dogs are a rare Lab breed that are recognized as "variations of the chocolate Labrador".

It is similar to the charcoal Labradors that came from the black breeds.

The Silver Labrador is claimed to have all of the properties and traits as regular Labradors with their silver-coated fur as their core difference.

Officially, the three different colours of Labradors still stands at three - yellow, black, and brown (chocolate) and the controversy that surrounds these rather beautiful dogs is their origin and whether silver should be a recognized colour or not.  Other colors that are not recognized are champagne and charcoal.

The controversy has its roots in the growing popularity of the chocolate Labradors, the variation that became so popular that the breeders of black and yellow labs witnessed a decline in owners wanting to buy their dogs.

Then one day it was discovered by the Crist Kulo Kennels in the United States that in order to produce silver Lab puppies, the parent must express the recessive chocolate genes as well as possess two recessive dilution alleles.

It was after that these silver Lab puppies were taken care of and grew up to be bred in hopes of producing more. Silver was a colour back then, but since the population of silver labs was small, they were all placed in the chocolate category instead.

As more breeders started to produce them, many in the canine world have started bashing them for being crossbred animals. Some have believed that they came from Weimaraners while others simply deny their existence all together and insist that they are crossbred chocolate Labradors. The American Kennel Club has indicated that while they cannot prove that a silver Lab is the result of crossbreeding with a Weimaraner, there is scientific evidence that this is probably the case.

Other sources indicate that a silver gene is now in those Labs that have been formed by gene mutation of chocolate, which is caused by dormant dilution genes suddenly being expressed.

One source attributes the silver Lab to poor breeding by an English club that specialized in English Labs.

The dangerous thing about these controversies is that some silver Lab puppies are being killed by their own breeders just to protect the standards.

Many of the groups opposing the Silver Labrador retriever are actually similar groups that oppose chocolate Labradors.

The problem with these controversies is that many of the rumours perpetuated by the Internet lack any evidence of their claims.

The bad news is that several unethical breeders start breeding as early as 6 months of age just for the sake of profit. These acts endanger the health of these puppies, which explains why the costs of the real silver lab puppies are more expensive. 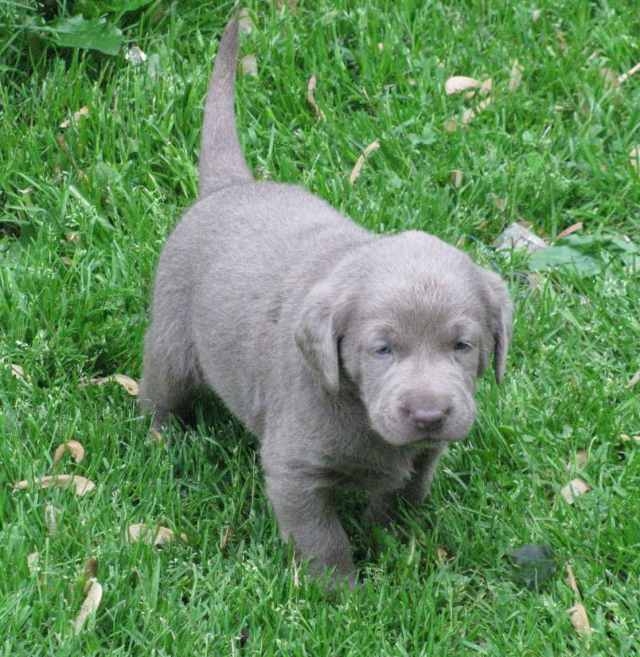 The Silver color is due to  the "dilution gene" (actually called the "melanophilin" gene or "MLPH,"  where it is believed that a Lab Breeder in the United States allowed the Lab to cross breed with the Weimeraner. A silver Labrador retriever puppy is the result of one parent that has the "dilution gene" and another parent that has the gene. Not all the puppies will be born silver.

If a Lab is silver, but has parents registered with the American Kennel Club (AKC), the club will register the dog as Chocolate. In investigating the issue, despite the Silver color, the dogs were considered purebred in every other way.

With the controversy aside, everything that matters lies on the owner or future owner of a Labrador.

Labradors are beautiful and caring dogs that need your care too. Treat them right and take good care of them no matter what their colour is.

The Silver Lab is identical in every way to other Labs and should get the same care.

More About The Silver Labrador Retriever

For an excellent review of the Silver Lab controversy see:

Analysis of the silver Labrador Population or here for a PDF Download.
Jack Vanderwyk

From Silver Labrador Retriever Information to the Labrador Home Page