Any Lab, but especially those to be used for breeding purposes, should have its eyes checked regularly by a vet.

PRA is, as its full title suggests, a progressive disease which will eventually leave the Labrador blind.

The disease is a generically inherited one and poses a big problem because it will not become apparent in a Lab until the dog is 6 – 8 years old.

This means of course that the dog may have already been bred and will have already passed the disease down to its offspring. 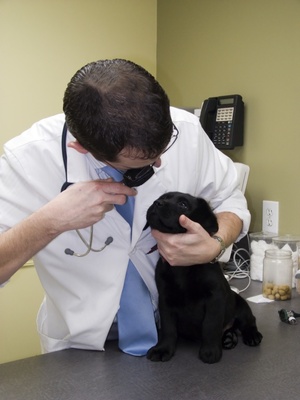 Because PRA is progressive, the retina is destroyed over time, there is no treatment to reverse the condition. PRA usually begins with the Lab losing its vision at night (a condition known as nyltalopia) with its daylight vision becoming increasingly poor.

Labradors can also suffer from another kind of PRA known as Central progressive retinal atrophy.

This condition is again inherited but the generic make up of Labradors means that the condition will not affect all those dogs that carry it.

Those Labs affected by the disease won’t show any symptoms until they are at least six years old but not all affected dogs will go blind. The first symptom observed is night blindness.

Some peripheral vision will be retained for a long time and the dog’s vision will improve in low light. Although the Lab suffering from Central progressive retinal atrophy may not go totally blind it is very common for the dog to develop secondary cataracts.

Unfortunately there is no treatment for canine PRA. Dogs can have a long and happy life when blind. Care includes keeping the dogs environment familiar by not moving around furniture and other objects.

Common Labrador Retriever health problems includes canine cataracts. A cataract is a clouding that develops in the lens of the eye or in its envelop obstructing the passage of light. It can occur in both or one eye.

In canine cataracts, if a large part of the eye lens becomes a cataract, then light is prevented from getting to the retina, causing poor vision. It can take on different types of appearances in the eye including small spots, a milky white haze, a cracked ice look, peal like appearance or even white streaks.

In some cases the cataract starts in a small part of the eye and then progresses and becomes larger. It is difficult for a veterinary ophthalmologist to predict the rate. The younger the dog, the faster it spreads.

Causes of Cataracts in Dogs

Inherited cataracts are a big problem in Labradors but they can also be caused by diabetes, injury or simply as a consequence of old age.

Be careful with false claims from homeopathic or other products. The only known medical way of treating cataracts in dogs is surgery. The prognosis for surgical treatment is good with the outcome the restoration of functional vision.

For more information on dog cataracts download this brochure from the American College of Veterinary Opthamologists.

Unlike PRA Retinal Dysplasia is a non-progressive eye disease that can be caused by viral infections, vitamin A deficiency, or genetic defects in the dog.