When you look at a Lab, you should see a strongly built, medium-sized dog that is sound and athletic, with a stocky, muscular body.

Of course it should be made clear right from the outset that the breed standard is defined purely in terms of competition.

If you have no interest in showing your Lab in American Kennel Club (AKC) competitions or dog shows than the breed standard can be completely ignored though it does provide useful guidelines to how the dog should be in terms of looks and size.

The breed standards do change periodically, though the last was in the mid 1990s and the AKC standard does vary a little with other associations such as Federation Cynologique Internationale (FCI) which is a confederation of kennel club’s from around the world including the English Kennel Club. 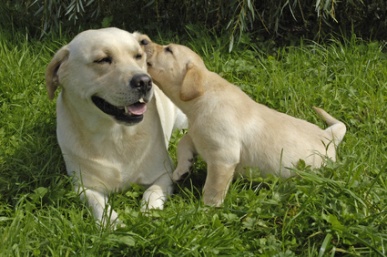 The AKC standard summarises that the Lab is a medium sized dog (measured from the floor to the top of the shoulders) with a short coat and large head.

The main points of the AKC Labrador standard are:

The ideal weight for a 1 year old male Labrador is between 65 and 80 pounds whilst a female of the same age would be between 55 and 70 pounds.

A male Lab should measure between 22.5 to 24.5 inches whilst a female should be around an inch shorter between 21.5 to 22.5 inches in height. It should be noted here that in AKC competitions if a dog is 0.5 inches taller or shorter than the standard he would be disqualified from the show. 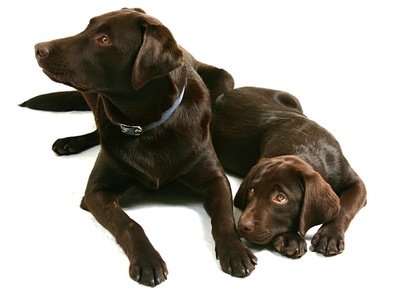 Not meeting the standard

As we said before, if you don’t intend to show your dog in AKC Labrador Retrievers competitions than the breed standard isn’t something to be concerned about, but if you do plan to show your dog there are certain characteristics that will lead to the dog being disqualified.

As noted above if the dog is 0.5 inches above or below the height standard than he won’t be allowed to compete. Similarly if the tail is altered in any way the dog will be disqualified. Lack of pigment in the eyelids and a pink nose will have the same result.

Of course the major factor with AKC Labrador Retrievers is their colour. Despite what some people believe or proclaim there are only three recognised Labrador colours; black, chocolate and yellow. And a dog not deemed to be of those colours will not be and purebred and will not be allowed to be shown in American Kennel Club events.

Thornton, Kim Campbell (2012-01-01). The Everything Labrador Retriever Book: A Complete Guide to Raising, Training, and Caring for Your Lab

The Labrador Retriever At Home