The Myths About Spaying & Neutering of Labrador Retriever Puppy

Spaying or neutering our Labrador Retriever Puppy is something that we all have to consider at some point.

I must say that I always do take this option for my own Labs for a number of reasons including the dogs future health.

However, there a number of urban myths and old housewife tales which surround the subject of spaying & neutering.

“Will my Labrador Retriever Puppy get fat” and “is it Safe” are just two of the questions which vets are normally asked about the procedure.

So let’s answer those questions and dispel some of the myths surrounding the issue.

In this article expert vets from Drs Foster & Smith discuss the myths that abound when owners discuss spaying & neutering their Labrador Retriever Puppy.

I heard that neutered and spayed dogs get fat and lazy. Is this true?

Spaying and neutering does change the metabolism of companion animals, so in most cases, they do not need as much food to maintain their weight as unspayed/unneutered dogs.

The problem is not with the dog - it is us. We just tend to overfeed our dogs, and neutered/spayed dogs are more apt to put on weight because of that.

As for laziness, again, the amount of exercise our dogs receive and their activity levels are often dependent on us. If we do not give them opportunities for play and exercise, they can become couch potatoes just like some people.

Many spayed/neutered dogs hunt, are entered in agility shows, become service dogs, and are trained in search and rescue. These dogs are anything but lazy.

My veterinarian recommended I spay my new puppy and she is only two months old. Is that safe?

Early spaying/neutering has been shown to be safe in multiple studies.

It must be remembered that younger animals may need different anesthetics and are more prone to hypothermia (lower than normal body temperature) during surgery.

But as long as procedures are modified to account for these differences, early neutering is very safe.

In fact, puppies neutered at a younger age often have faster recoveries than those neutered when they are older. 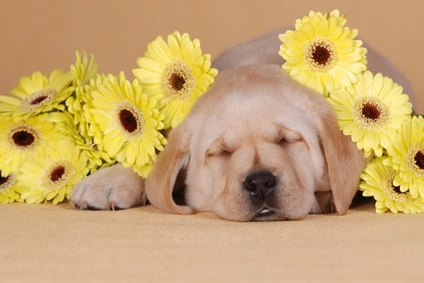 I was told I should let my dog go through one heat before I have her spayed. Is that what you recommend?

We recommend that dogs be spayed before they have a heat. There are several reasons for this:

Spaying a dog before her first heat is the best way to significantly reduce the chance your dog will develop breast cancer, a common condition in female dogs.

Any heat brings with it a chance your dog could become pregnant. This would adversely affect the health of a young dog.

A heat also brings with it the chance for accidents. Dogs in heat have been known to run through glass patio doors, jump out of moving cars, and be hit by cars as they attempt to find a mate.

Owners of females in heat also frequently have to deal with a sudden influx of male dogs around the home and yard. These amorous visitors leave numerous droppings, and spray plants and trees with urine in an attempt to mark their new found territory.

There is also the mess and hassle of vaginal bleeding that typically goes on for 7 to 14 days. Who wants to deal with that if they do not have to?

Reprinted as a courtesy and with permission from PetEducation.com

Labrador Retrievers And Their Health