In Spaying A Labrador Retriever

Spaying a Labrador Retriever bitch is a recommended course of action for all Lab owners.

The procedure has positive implications for both the dog’s health and also the troublesome issue of unwanted pets.

In this article expert vets from Drs Foster & Smith take a very in-depth look at the issues surrounding spaying a Labrador Retriever and other dogs and also discuss the many advantages and benefits in carrying out the procedure.

Spaying (Ovariohysterectomy): The Benefits in Dogs

Newspapers, radio, and television commonly feature articles about pet overpopulation. They stress the fact that too many puppies and kittens are produced every year and that there just are not enough potential owners to go around.

The obvious conclusion is that we should breed fewer dogs and cats and produce fewer litters. The best way to ensure that this occurs is through sterilization procedures, so a larger percentage of dogs and cats are incapable of breeding. Performing an ovariohysterectomy (Spaying A Labrador Retriever) female animals is the best approach to decreasing the number of puppies and kittens.

Being veterinarians, we also know that spaying a labrador retriever and castrating pets are important to the average pet owner because of the health and well being of their animals. So, although you may spay your animals in an effort to help control a national problem, in doing so, you increase their chances of living long healthy lives.

In most cases, people find out that it is hard to find good homes for all of the puppies, regardless of the selling price. In addition, not all pregnancies go smoothly.

Difficult labor, puppy mortality, and potential health problems in the mother, such as uterine and mammary gland infections, can take all the fun out of the experience.

Most of the clients we have worked with end up wishing they would never have allowed their female to have a litter. Professional breeders are prepared and equipped for the entire process and it should generally be left to them. 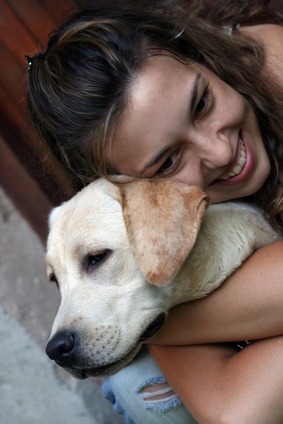 The reproductive tract of the female dog begins with the ovaries where the ova (or eggs) are produced. When a female puppy is born, every egg that will be released by her ovaries over her lifetime is already present.

They are, however, in an immature form and require further development to reach a stage that can be fertilized by sperm. When a dog's heat cycle starts, hormones stimulate the maturation of some of the ova or eggs. The ova are then released through the surface of the ovary and pass into the oviducts. These are tiny tubes that run between the ovaries and the horns of the uterus. It is within the oviducts that fertilization (the union of the sperm cell and ovum) occurs. The horns are the muscular section of the uterus between the oviducts and the body of the uterus. The uterine horns of dogs can vary greatly in length and diameter.

In the typical 40-pound dog, they are normally about four inches long and the diameter of a wooden pencil. When the animal is in heat, their thickness will easily double and they may lengthen slightly. During pregnancy, they will vary from 2.5 to 6 inches in diameter and up to 24 inches in length. The horns attach to the body of the uterus, a short common area where the horns meet. The uterus ends at the cervix of the dog.

During pregnancy, most puppies develop within the uterine horns, but one may reside within the body of the uterus.

There are birth control pills and medications manufactured specifically for use in dogs. Most of these oral products can have serious unwanted side effects, are expensive, and usually cannot be used for long periods of time.

Since birth control pills are not a viable option as a practical permanent form of sterilization, the only option is surgical sterilization.

In the female, this would be either spaying a labrador retriever (medically referred to as ovariohysterectomy); a hysterectomy, in which only the uterus is removed; or a tubal ligation. These are different surgeries, but each one will prevent future pregnancies if done correctly.

Only an ovariohysterectomy should be considered for the long-term health of your dog.

Ovariohysterectomy: An ovariohysterectomy (OHE) or spay is the complete removal of the female reproductive tract. The ovaries, oviducts, uterine horns, and the uterus are removed. Not only does this procedure prevent the animal from becoming pregnant, it also eliminates the twice-yearly heat cycles.

The surgery removes the source of production of such hormones as estrogen and progesterone. These hormones are responsible for stimulating and controlling heat cycles and play a major role during pregnancy. But they also have other effects on the body and some of them are potentially harmful.

Tubal Ligation or Hysterectomy: A tubal ligation, whether in veterinary or human medicine, only affects the oviducts. These small structures are isolated during surgery and then cut and tied off with suture material.

This prevents the ova from coming in contact with sperm cells or passing into the horns of the uterus. In a hysterectomy, the uterus is removed, but the ovaries remain.

With either procedure, the hormones that are normally produced by the ovaries continue to be released to the rest of the body. This is fairly important in humans. However, in dogs it is a disadvantage.

Tubal ligations and hysterectomies, through owner demand or veterinary preference, have never been very popular in canine medicine. Some owners see hysterectomy or tubal ligation as a way to sterilize the pet, yet still allow her to experience heat cycles and participate in mating.

Because the ovaries remain in the animal, the disadvantages of these procedures are similar to those seen in intact dogs (dogs that have not had surgical sterilization).

Disadvantages of tubal ligation, hysterectomy, or not spaying your dog

An OHE eliminates most, if not all, of the female hormone production. In so doing, the real advantages of this procedure are realized. In human cases, great efforts are undertaken to maintain or restore hormone production in the body, but the same is only rarely true in canine practice. These hormones play key roles in reproduction in the dog. However, they can also have many unwanted side effects.

Estrus: During the heat cycle there are behavior and hygienic problems that develop. Females in heat will actively search out male dogs and may attempt to escape from the house or yard, putting them in the danger of traffic, fights with other animals, etc.

Often there is a sudden influx of male dogs around the home and yard. These dogs leave numerous droppings and spray plants and trees with urine in an attempt to mark their new found territory. Owners also need to contend with the vaginal bleeding that typically lasts for 4 to 13 days.

Mammary cancer: Estrogen is one of the primary causes of canine mammary cancer, the most common malignant tumor in dogs. Animals that are spayed prior to one year of age very rarely develop this malignancy.

Tumors of the reproductive tract: Tumors can occur in the uterus and ovaries. An OHE would, of course, eliminate any possibility of these occurring.

Uterine infections: Many female dogs have problems with a severe uterine disease called pyometra following their heat cycles. With this disorder, a normal three-ounce uterus can weigh ten to fifteen pounds and be filled solely with pus. Undetected, this condition is always fatal.

Its treatment requires either the use of expensive hormonal and IV fluid therapy or an extremely difficult and expensive ovariohysterectomy. A normal spay costs between $100 and $200, while one done to correct a pyometra can easily cost $600 to over $1000, depending on complications. The strain on the kidneys or heart in some of these cases may be fatal or cause life long problems, even after the infected uterus has been removed.

False pregnancy: Some bitches fail to routinely go out of their heat cycles correctly causing a condition we call 'false pregnancy.' In these cases, even though the bitch may not have mated with a male dog, her body believes it is pregnant due to some incorrect hormonal stimulations that it is receiving. The dog may just have some abdominal swelling and/or engorgement of the mammary glands, but in some cases, they will even make nests and snuggle with socks or toys against their bodies.

These animals often experience no longterm serious problems, as the behavior disappears when the circulating hormones return to their appropriate levels. In others, we may see mastitis (infection of the mammary glands), metritis (infection of the uterus), or sometimes these cases develop into full-blown pyometras. We recommend spaying dogs that consistently have false pregnancies.

Hair coat problems: In dogs, hair does not grow continuously as in people, but has a definite growing (anagen) and resting (telogen) phase.

Estrogen, which is increased during estrus, retards or inhibits the anagen phase, so more hairs are in the telogen phase. These resting hairs are more easily lost because they are less firmly anchored. As a result, the hair coat on many dogs suffers because of estrogen surges that occur with heat cycles or whelping. Their coats appear thin and the underlying skin is exposed in many areas. It can take two to four months for the hair to return to normal.

Additionally, there are a small number of female dogs that never develop a normal hair coat because of the cycling hormones. Their coats are consistently thin over the sides of their bodies and these cases are sometimes confused diagnostically with hypothyroid animals. The only treatment for these dogs is an OHE.

As can be seen from our discussion, an ovariohysterectomy (Spaying A Labrador Retriever) eliminates many medical and behavioral problems that a tubal ligation does not. In fact, in many dogs, an OHE probably adds years to their lives or at least provides them with a more comfortable, less stressful life.

The OHE does its part in pet overpopulation, but you, as the owner of an individual dog, should also view it as a way to increase the length and quality of your pet's life with you.

Reprinted as a courtesy and with permission from PetEducation.com

Myths Of Spaying A Labrador Retriever

An Overview Of Spaying & Neutering